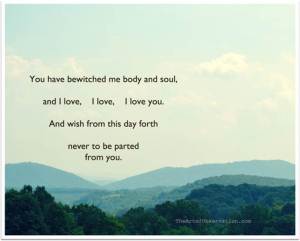 Photographs and memories are deceiving. They can cause a lot of emotional distress for perfectly innocent reasons. I’ve been sorting through old photographs of mine, and also of my husband’s, for a project I am putting together for our “wedding.” (We were already married in August of 2007, but we are doing a little celebration for family and close friends in May). There’s a book for me, a book for him, and one of us.

I turned 40 last year, and to help take the sting out of that, someone suggested crafting a book of photos that chronicled my life so far (a “Maeve” retrospective, if you will 🙂 ) It really did help put things in perspective – that high school and college were a fun time (sometimes) but so small in the grand scheme of things. I saw myself younger and full of potential and passion, and it was interesting to see how life and time change your face. It has been said that at 50 you get the face you deserve. I honestly can’t wait to see mine. I’ve worked hard at becoming a better person and to mend fences as best I can so that it doesn’t “wear” on me as I get older. In a lot of ways I feel younger and more focused than I’ve ever been.

God, I love my husband. How did I get so lucky? What cosmic pixie dust blew my way that night I returned his “wink” on match.com? We talked about this yesterday, how much choices influence us, and sometimes, even the wrong choices can put you on the right path. The documentary “Prince of Paisley Park” was on, and I was fascinated by the fact that Prince’s father moved to Minneapolis, MN as a Jazz musician. Now, forgive my ignorance, but Minneapolis MN in the 50’s doesn’t seem to me like it would be the Hub of musicians and a mecca for playing (I’m probably wrong, but just go with me). The circumstances that led to Prince becoming Prince were woven into that choice. A neighborhood that was almost completely white. Clubs and bars that were places to shine, but not really on a country-wide scale. Frustration on his father’s part – maybe enough to set the wheels in motion regarding alcoholism and abusiveness. For better or worse, Prince was forged in this fire and came out the other side, to become one of the most formidable talents and performers of his generation. Who’s to say that if his father had moved to Chicago or New Orleans or some other area more recognizable for Jazz, that his life would have turned out that way? Sometimes the crucible has to be really hot to burn away the impurities and filter the precious metal to the top.

This is how I have to take my husband’s youth. We went through a whole box full of memories and photos, and proms, and dances, together yesterday. I was actually glad he was there to tell me the context, rather than me making up my own stories.

He had a relationship with someone from the end of high school through his mid-20s. There were an awful lot of photos chronicling this era. While I was looking for pictures of him when he was younger, I got to know him a whole lot better. I couldn’t help it, I started to cry when I saw him with this woman and looking so happy and in love, and most of all, young. Proms, dances, sorority functions, they were all there, smiling up at me from their youth. A youth filled with love, excitement, and probably, lots of sex!

I think more than anything I wished I had had a youth like that. I was a late bloomer, and coupled with the alcoholism in my family, I barely remember my teenage years and early 20s very well. I was desperately trying to find out who I was. I never really had a high school sweetheart or a boyfriend till I was well into my 20s.

I am envious of this American phenomenon called “prom.” In Canada, at least where I grew up, we didn’t have proms. We had dances throughout the year, but no “spring formal” or anything like that – certainly nothing that would warrant having a formal picture taken with one’s date, and a different dress and tux rental for each! Date? We all sort of showed up and hoped nobody had puked in the corner of the gymnasium when we snuck over to neck with the cute jock from freshman year. There were only 400 of us in the whole school, grades 9-12. I graduated with about 30 other people that I had gone to kindergarten with, out of a hundred or so total. So high school was more about seeing everyone grow up with you, and having the same friends since grammar school. There wasn’t that anonymity that larger high schools have. In looking at Sean’s yearbook, he didn’t know a lot of the people he graduated with.

So, you see, when I see Sean in his tux, with the matching cummerbund to his date’s dress, I think I’ve missed out somehow.

It helped to hear that his relationship with her through all those years was not the best. Yes, he was smiling, but it was rocky – separations – physical and emotional, studded it through the years. Normal teenage and young adult emotions played a part in all of it.

I can’t be jealous of the woman who got so many of his years through his youth. We met at exactly the time we were supposed to, for exactly the right reasons. She may have photographs, but I’ve got him. I’d like to say I can rise above it and see it through my adult eyes. But somewhere, the teenage me is still feeing rejected, and like I wasted the best years of my life NOT having sex. Cripes – if I had that body now that I did then… OY!!

So, like Prince, our life together was forged by some bad choices, or choices we thought were bad at the time, but turned out pretty well. If he HADN’T had the relationship with her, he might not have ever gone to Berkeley, and then come back to Burbank. If I HADN’T had the brief affair with a friend’s friend when I came out here on vacation, I might have moved to New York instead of Burbank. And I know, deep down, so far, further than I’ve known anything ever before, that we are meant to be together. I know it like I know how to breathe.

Anyway, I did the only thing I could at the time while looking at the photos – wiped away my tears, and instead of focusing on “them” together in the pictures, I tried to look at my husband as a young man, full of promise, and love, and passion – those blue-green eyes so open and honest, those long legs like a young colt – and I fell in love with him all over again. How lucky am I that I got him and that he HAD this fabulous past that he can remember and share with me as we grow older together and get closer. I’d rather have him now, with that past AS the past, than to have loved him when we were younger and lost him, to have a lifetime of “what if,” and “if only.”

And, after looking at all of those pictures with his dark hair and buff body, the sea-green eyes and crooked smile, I did the other only thing any normal woman in love would do – I took him to bed and chased away our ghosts, exorcised them to the past, where they will firmly stay.